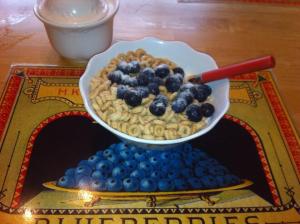 Here is a paraphrase of some of my online rambled anger to a friend (who is an adoptive mother to a young lady of color) about the “not guilty” verdict for Zimmerman this weekend.

…I’ll get off my soapbox now. Maybe I’d be doing better to continue my devotion to Cheerios and continue to pray by way of singing “row, row, row your boat.”

While my dogs were taking me for a walk last night I started to worry a bit about what I may have written in that thread of responses to her tearful reaction to the verdict. My intention was to support her, but I went straight into my particular upset and anger.

I stopped mid park and tried to bring up Facebook on my phone to read what I said, but

sweat and dog tangle kept me on the move.

By the time I got home and tried out the key lime pie (it was only so, so), and got into dry clothes, and took the dogs out…again…and settled onto the couch…the effort to go slowly through the scrolls on my kindle over rulled my need to reconsider if I had said something offensive or hurtful.

Earlier in the day a college roomate made a couple of comments during a fun but chaotic attempt toward texted conversation between her, me and a third best friend. This friend, who is summer traveling, was sorting through some feelings about an early morning conversation. Two different times later in the day, she said to us:

Thank you for listening. I don’t mean to whine.

Which we teased by saying something to the effect of:

More Whine! We miss you! Pass the cheese.

The interesting part is that, far better than I with my sweaty, dog tangle, pie focused evening goal to permanently plop and give in to my day…she had texted a few times that she already, hours after the uncomfortable conversation, had plans to revisit what had been said and ask for clarification. She also had thoughts on how she was going to find a way to tactfully assert a few things of her own so that her recent hard earned confidence is not left unspoken, which could end the visit on a less satisfactory note. 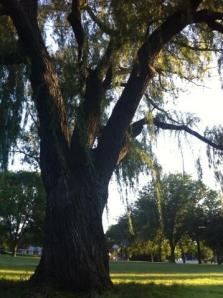 It didn’t work out to confirm this, but I’d say that all three of us were better able to enjoy our Sunday while our interuppted conversations fizzled out on the liberating note that, now that we have battled our way into 40’s, we each waste far less time worrying about being liked.

And, I am now all the more homesick for both of them, and frustrated at the lack of time and ease to communicate without interupption or distraction. (Insert here sensory illustrations of the smell of sweat and sounds of meatloaf timers going off).

Yet, I’m waking up this morning feeling like we texted a toast to us and our hard earned, OlderAndWiserThanWeWere approach to our days.