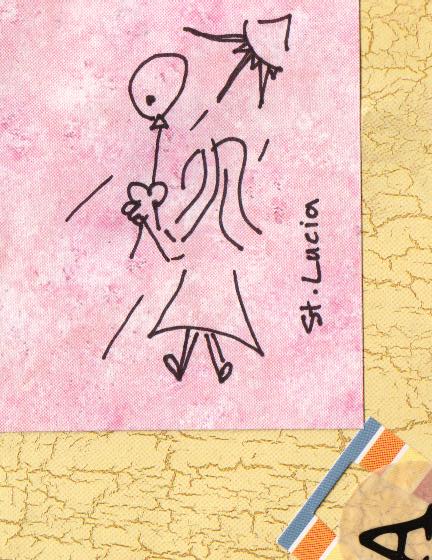 delivered her eyes to her lover on a platter
in an act of devotion
because he had once admired them
exchanging her vision for the prophet’s.
In an act of devotion,
Saint Lucy lost her sense,
exchanging her vision for the prophet’s.
She desires inspection.
Saint Lucy lost her sense
Traded spectacles for dreams
and denies inspection.
Saint Lucy, unspoken,
for she can not weep
and loves her Lord, fiercely.
Such women are disfigured by their devotion.
Saint Lucy tore out her eyes
and raised gaping lids to God. 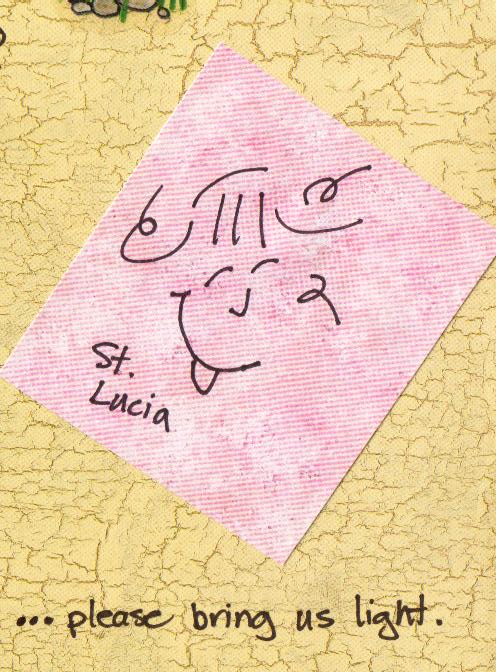 Euthychia suggested that the sums would make a good bequest, but Lucy countered,

you cannot take it with you.

Give now to the true Savior,

while you are healthy,

whatever you intended to give away at your death.” 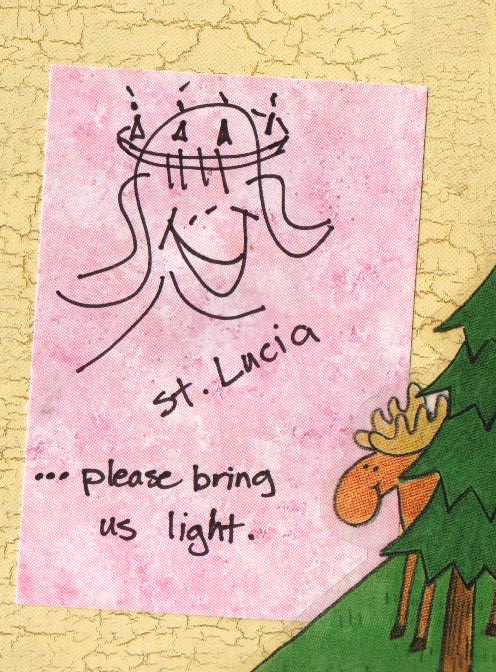 Just a couple of notes on which to end my weekend.

1: another awesome definition of grace.

2: overdue update to let you know that my vision is doing great and I am very, very relieved.

About number one on my list: my mother was famously all about the reality of God’s grace in her midst. She died several summers ago, but I know she would be okay with me describing her life as fueled by the pursuit of grace, especially in the last several years of her journey.

I think, but there is no way for me know, that she would pull one of her trademarked celebrations which was to throw her hands in the air and yell: “YES!” if I said that she defined grace as

For certain, I nodded my head this morning when our new pastor said,

“And the great thing is that grace can not be earned.
It just can’t be earned.”

It’s true…it’s more like, well, what my mom said in my mind just now : unexpected joy.

So I guess that my number one turned out to be a definition with a bonus quote that tells us what grace is not.

And, about number two: I think that in one of my last posts I mentioned that I was having a lot of issues with my sight last winter. Wow. I should look back at that, but I’m pooped from Father’s day celebrating.

The good news is that my sight is now great. I hope I didn’t lead to any worry by not writing this spring! I went from only being able to read at length by way of large print to having almost perfect vision. I have one more cataract to remove at some point in the future, and it is possible that it will be my fourth but LAST eye surgery. Whoop!

The surgeon who removed my cataract was spot on in that my lazy eye corrected itself quickly after having the cataract removed that she described as “debilitating”. In addition, she is not overly concerned about me having glaucoma, so she escorted me along my way.

Great news huh? I’m here to tell you that the process of my eye muscle hopping my peeper back into place (it would jiggle and strain as it was trying to adjust) was no walk down Mark Twain Lane.

Yet…it’s done and I am increasingly joyful at the unexpected joy that grace brought my way this spring. 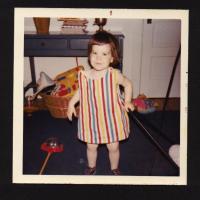